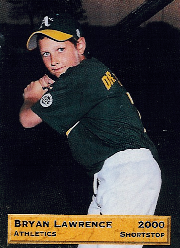 In January 1998 our youngest child Bryan complained of headaches. After several visits to the family doctor this seven year old was scheduled for a MRI. By late July 1998 Bryan was diagnosed with Medulloblastoma, a malignant brain tumor. He underwent brain surgery in August, followed by radiation, and chemotherapy, which lasted through January 2000. Throughout this period Bryan maintained good grades in school, stayed active in most of the sports he loved so very much; and was throughout a pleasant child to share the world with.

We thought our problems were over. However, in July 2000 our family was informed that Bryan’s cancer was out of remission. It was a devastating blow, a family’s worst nightmare. Bryan started a second round of radiation and chemotherapy. In January 2001 Bryan’s Doctors explained that Bryan’s cancer was not responding to treatments, and recommended that our family and friends spend some quality time with Bryan. As a family we could not sit back and accept that news. We explored some very costly alternative cancer treatments that were ultimately unsuccessful. On April 11, 2001 Bryan passed away at home with his family in attendance.

Throughout Bryan expressed a spirit worthy of remembering and celebrating. Our goal effort to assist families experiencing the destructive consequences of childhood cancer is driven by the spirit of Bryan M. Lawrence.